Of late, I've heard television media commentators referred to as pundits, so I went to dictionary.com to track down the definition:

pundit - noun
1. a learned person, expert, or authority.
2. a person who makes comments or judgments, esp. in an authoritative manner; critic or commentator.

My reaction to this, especially definition #1, is that most, if not all of these commentators (e.g., Rush Limbaugh, Bill O'Reilly, Glenn Beck, and that ilk) have no evident claim to being learned, experts, or authoritative with regard to their topics. They have no qualifications to back up their rhetoric. Rather, I believe that another noun needs to be used in reference to them:

demagogue - noun
1. a person, esp. an orator or political leader, who gains power and popularity by arousing the emotions, passions, and prejudices of the people.

Feel free to consult dictionary.com for yourself if you suspect I might be misleading you with these quoted definitions.

It's pretty obvious to me that today's commentators are demagogues, not pundits. They certainly have gained power and popularity by appealing to emotions rather than evidence. What evidence they provide is typically distorted, out of context, and misleading, with the clear goal of such misrepresentations being that of inflaming the public. They take advantage of their positions in television to imply status as journalists, but they are not journalists in any meaningful sense of the term. Their political biases are up front for anyone to see.

If you agree with them, of course, you probably see them as speaking sacred truth. If you disagree with them, and do so effectively (thereby gaining their attention), they'll assassinate you from their rostrum. Anyone who disagrees is labeled ignorant, stupid, or a demagogue in return. Anyone on their program who fails to live up to their 'standards' (i.e., disagrees with them about anything) is cut off and/or ridiculed. No effective spokesperson for any cause that these folks oppose is allowed a level playing field for an open discussion of any issue.

These are master spinmasters, who've parlayed pandering to their constituency into fame and fortune, as well as claiming to be pundits. And they clearly have colossal egos, to boot. Don't be deceived into letting such demagogues do your thinking for you ... history is replete with examples of the dangers associated with demagoguery. Inflammatory rhetoric can easily go down a road toward polarization and even violence.
Posted by Chuck Doswell at 1:00 PM No comments: Links to this post 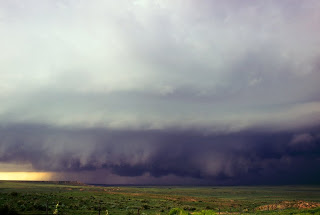 As the spring routinely replaces the winter, all storm chasers find themselves caught up in what we see as the drama of "moisture return" on the US plains. Winter seasonal cold fronts drive relentlessly through the plains and on into the Gulf of Mexico, pushing tropical moisture repeatedly southward, away from the plains. But as the spring beckons, each new weather system begins to have the potential to bring copious low-level moisture into its "warm sector". This is "moisture return". We chasers find ourselves thinking about such things when the winds swing from southward to northward in the more or less regular passage of weather systems. In the winter, it's hopeless, but as the seasonal transition arrives, hope begins to return with each new system. As temperatures rise, the cold frontal passages trend toward not driving so far southward. With the arrival of the next system, hopefully, the moisture has less distance to cover if it is to intrude into the plains in advance of the next weather system.

As the spring advances, those southerly flows eventually will begin to return enough moisture into the plains to promote and sustain severe thunderstorms. The strong southerly winds are induced by falling pressures over the plains, caused by the advancing weather systems in a complex dance of dynamics - the winds respond to those falling pressures and as the southerly winds in the plains begin their siren song, that sound is not only the harbinger of the passage of yet another weather system. It begins to include the promise of supercells and severe convection. Hope "springs" eternal! Those winds are beautiful music to a storm chaser, and there's nothing better than waking - after a night of howling winds rattling the house and rustling through the trees - to the sight of "Gulf stratus": low clouds racing northward in the low-level jet stream that are a visible signature of the arrival of that long-anticipated moisture return off the Gulf of Mexico.

Years ago, my friend Al Moller and I were on a storm chase. We were younger and had less disposable income, so from time to time we actually spent the night in a tent, rather than a motel, to save money. That spring, in the latter part of May, we pitched our tent in the "scenic turnout" at the south end of the Palo Duro Canyon on Texas Highway 207. It's not a formal "campground" but we used it for that, anyway. We were hoping for moisture return in advance of a storm system that provided the potential for a chase day on the following day.

That night, as it turned out, the south wind screamed and howled all night long. The tent was continuously flapping in that wind, and the racket of that flapping virtually guaranteed us little sleep during the long night. Although we both tossed and turned in sleepless frustration, we also silently rejoiced in that damned wind that was keeping us awake, because we knew what it meant: the next day would dawn ripe with the promise of severe storms. No words were spoken, but we both knew what that wind meant!

And so it developed, as the day dawned (25 May 1977), we rose earlier than we otherwise would have. Sleep had been elusive that night but our anticipation was at a fever pitch. And the day that followed was rewarded with an explosion of supercells in the TX panhandle (see image from that day, above). We chased the whole day without letup - but we went to bed in a motel the following night. It had been a great chase day, albeit without a tornado to cap off the chase. We slept soundly and happily that next night, of course.

Although storm systems pass more or less regularly through the US plains, the quantity and quality of the moisture return is a key factor in the potential for severe storms. Uncertainty is a product of nonlinear dynamics and its sensitive dependence on initial conditions. Every weather system is different and there are no guarantees. Any chaser worthy of the label always is willing to sacrifice comfort for the promise of a big chase day - return flow is a common issue of concern for a chaser, and that night's loss of sleep in late May turned out to be a small price to pay its contribution to our experiencing great storms the next day. The gusty, throbbing beat of sustained return flow that night was a joy to our ears, despite its prevention of a restful night. If you're a storm chaser, you know what I mean. And if you're not a storm chaser, this will make little sense to you.
Posted by Chuck Doswell at 10:52 PM 1 comment: Links to this post