Driving about during storm chases gives one a fair amount of time to ponder. Yesterday (03 June 2010), I noticed a lot of farm equipment sitting in people's yards, much of it showing signs of rust and other neglect. I couldn't help but think of my Uncle Irving - he was a farmer who held some strong feelings of pride when it came to his farm. When a farm implement's duties for the season were complete, he didn't leave it higgledy-piggledy somewhere outside to rust until it was needed next year. It was cleaned up and prepared for its off-season (repainting, covering unfinished metal areas with a rust-resistant coating, etc.) in a barn, out of sight and protected from the elements. He always got a special break from the implements dealers because when he brought something back for a trade-in, it was always in great condition! Moreover, his farmstead was never cluttered with rusting equipment.

In this society, which treats everything as disposable, I have to say that I was raised to be more respectful of the tools I use. And to not clutter up my yard with them.

And he didn't tolerate the unchecked growth of weeds anywhere on his property. When the weeds got bad, it was our job (my cousin and I) to go take care of that. No, sir! No weeds. He took pride in the appearance of the farmstead, and my Aunt Fran always maintained flowers and other adornments, as well. Driving into the farmstead made one feel the pride of ownership and the responsibility of stewardship for the property (and the land).

Dashing about the plains makes me realize how special my aunt and uncle were. I still miss them ...
Posted by Chuck Doswell at 9:28 AM 3 comments: Links to this post 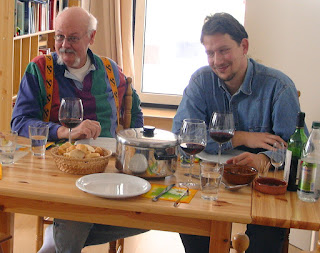 Enjoying some pre-dinner wine with Nikolai and his family in his home at Gilching, near Munich.

I'll post a more substantial tribute to Dr. Nikolai Dotzek on my website when I get a chance to adjust to the shock of his loss, and return from my storm chase trip. [update: that tribute is now posted here] Over the Memorial Day weekend, my good friends Johannes Dahl and Harold Brooks told me about the devastating loss of one of my best friends, Dr. Nikolai Dotzek.

This is a man whose greatness will only become more obvious with time. He was a passionate and dedicated scientist, whose role in bringing Europe into the sphere of severe storms meteorology cannot be underestimated. He was truly a leader in his chosen field, and people gladly followed his lead because he never hesitated to roll up his sleeves and pitch in wherever it was needed. A towering figure among scientists of his time, truly - certainly not limited to his physical stature (he was an imposing physical figure, exceeded only by his many important scientific accomplishments).

But Nikolai wasn't some 2-dimensional, cardboard cut-out version of a human being. He relished the good things in his life: the love of his wife, Birgit, and his two boys, Gregor and Armin; a good German beer: a tasty meal grilled on the patio outside his flat; his bonsai trees; AC/DC music; and so on. His love of life is all the more poignant for all of us who knew him, with its loss.

There can be no words of comfort to explain the inexplicable death of a man in his prime, with so much that he (and we) had to look forward to. It's a mystery of life I simply don't understand - why a good man is cut down well before his potential is fulfilled. I should not be mourning his loss - that's just wrong in so many ways. Death is a part of life, but Nikolai's was too soon! Too soon!!!

Nevertheless, I want to make sure that we all appreciate the vast happiness he brought to so many and the numerous contributions of this great man, and not to spend too much time dwelling over his loss. Rather, we should be grateful to Providence for allowing us the time we had with him. He enriched the lives of so many, it would be selfish to dwell on the negative part - losing him prematurely. Instead, we need to pick up the pieces of his dreams and work to make them real, as he would have wanted us to do. His dreams were great, and so was he. We would be remiss if we let his dreams die with him.

And we should each do whatever we can to comfort his family, in their anguish. We all share in their grief. It breaks my heart to think about Birgit and the boys ... who will be struggling to deal with this tragedy.
Posted by Chuck Doswell at 8:56 PM 3 comments: Links to this post

Even though I'm on the road in our annual chase vacation, I have a "down" day and thought I'd put this one out, because it's fresh on my mind. We recently stayed at a Super-8 motel in Dodge City, KS our first night out. The next morning, I went to check out and when I completed that task, I discovered that we couldn't go out the way we wanted to because of some self-centered prick. "Why not?" you might ask. You know those covered entrances in front of the lobby doors at many of the yuppie motels ? They typically have room for two vehicles side-by-side, right? This thoughtless shithead had parked his fat-ass SUV right in the middle, so that no one else could get by on either side! Outside of this covered thingy, there was another lane and a half - but dipshit #2 in his fat-ass pickup had blocked that passage, as well.

Asshole #1 then came out and got into his vehicle ... and proceeded to sit there motionless for several minutes while we waited for him to remove his mobile roadblock. We finally gave up and backed out through the parking lot the way we came, and went out the other end. Only to see brainless bozo #1 finally pulling out!! It sure seemed as if this bastard sat there and waited, to force us to back out of there. He certainly never seemed to care that we were waiting for him to get out of the way.

I recently returned from China, and I have to say that I love the Chinese people, for the most part. But I was astounded at the frequency I encountered folks who would want to have a conversation while blocking the aisles in a crowded Beijing store. Or would stop suddenly on a crowded sidewalk and start gabbing with a friend. Or would walk 3-4 abreast, making it necessary to detour around them. Perhaps this is not uniquely Chinese (You think?), but it just seemed as if I encountered it way more frequently there than at home. Perhaps big city people are just more thoughtless, in general. I was raised differently ... to think about someone besides myself from time to time.

It's a pet peeve of mine that I see people acting as if there's no one else in the world other than them. Their needs, their convenience, their concerns simply trump those of everyone around them. If they even notice anyone else!! Never a thought to get out of the way. Never a moment spent worrying about how their actions might create difficulties for someone else. Is this self-centeredness a learned behavior, or is it something some people are born with and never seem to outgrow?

They're the same dickheads who leave shopping carts right in the middle of parking spots throughout the Wal-Mart parking lot. They're the same careless assholes who deposit their trash everywhere in a state or national park. They're the same mindless idiots who watch blankly from inside the elevator as the doors close right in front you as you're obviously hurrying to get there.

If there's an afterlife with something resembling hell, I hope there's an especially hot place reserved for these M-Fers!!
Posted by Chuck Doswell at 5:41 PM 8 comments: Links to this post