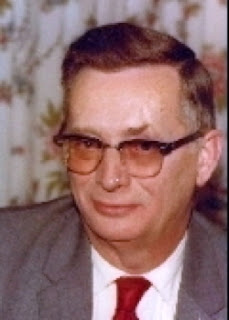 A sort of formal portrait of Walt.  He wore that gray suit a lot and his expression here reveals a mischievous smile that was seen often.

Today, I learned of the death of Prof. Walter J. Saucier - his obituary is all too brief, and doesn't begin to touch on the tremendous impact he has had on so many of us. I mentioned him here as one of those who were most influential on my career. Walt was an uncomproming scientist, who never let misconceptions and misstatements go unchallenged. He was an educator of the highest rank, who was more concerned with being an educator than he was with advancing his career. He founded 3 different meteorology programs (at Texas A&M, University of Oklahoma, and North Carolina State University).

But the very traits that made Walt such a compelling role model for me also served him poorly at the level of university bureaucrats. By not suffering foolishness gladly (or silently), he got into trouble with the coneheads and by not participating in the gamesmanship of being a university professor, he didn't have all his boxes checked when he was challenged by those bureaucrats. He was still bitter about what happened to him here at OU (leading to his departure to North Carolina) when I saw him at the 25th anniversary of the OU Meteorology department. I very much hope he gave up most of that bitterness in his final years, as the 50th anniversary looms on the horizon this year (2010) - it made me sad to see him still so unhappy about what happened.

Walt was a great teacher, who was so entertaining in the classroom, you had to discipline yourself not to be distracted by his delivery. The content of his lectures was thick with profound understanding and he conveyed it without any hint of ego, but rather with great enthusiasm. I feel sorry for anyone who may have read his textbook (Principles of Meteorological Analysis) without having also heard him lecture.

But he was much more than a teacher. Among other things, he was a great cook (appropriate, given his surname) and a great host at parties. Walt liked good food and drink, and enjoyed sharing his likes, even with lowly graduate students. And he was a good friend, who always wanted to discuss new ideas about kinematic analysis - one of his favorite topics.

For those of us he has left behind, we will always have the benefit of his tremendous professional legacy: the students he influenced and his incredible textbook. Our time with him was an enormous blessing. I offer my deepest sympathies to his family in their loss and want to let them know how much he meant to many, many people - we thank you for sharing him with us.
Posted by Chuck Doswell at 2:19 PM 2 comments: Links to this post

It's been my experience that most people believe that their jobs are difficult and underappreciated, whereas other people's jobs are easy and overrated. This relates to the notion of bias - a friend of mine has suggested that everyone is biased, and I agree with him. If you believe that your job is more challenging and, at the same time, more meaningful than what someone else does, you've implicitly admitted that you're biased. I suppose that this form of bias - disrespecting what other people do - is a direct result of knowing what we do, combined with ignorance of what others do.

Such implicit disrespect manifests itself in many ways (including bashing and backbiting), but most people shy away from saying (in a face-to-face conversation) the disrespectful things they may be thinking, most of the time. Today's "blogosphere" means folks can hide behind a screen name or vent their feelings without regard to how their rants might affect real people, with names and faces. They don't have to answer anyone's objections and responses, and certainly don't have to confront the possibility that they might be wrong! Avoiding interactions with the victims of your vitriol may be easy, but it's not effective communication, and it's not a very good way to learn.

If these critics of someone else actually could say what they think, face-to-face, directly to the people they're dissing, the responses might turn out to be enlightening, and the chance might exist (if their minds aren't completely closed!) that they'd have to admit to bias and even ignorance. I want to illustrate this with an example near and not-so-dear to most meteorologists: many people say that forecasting the weather is easy, because you can be wrong most of the time and still get paid. Clearly, this is simply a false proposition on at least two levels, but this view is widely held by non-meteorologists. That this is wrong should be apparent to most everyone with any serious knowledge of the science, but unfortunately I also find that many researchers have little or no respect for forecasters - and, not coincidentally, that lack of respect is reciprocated! Many years ago, a colleague told me that meteorologists were their own worst enemies, which I have seen to have more than a grain of truth during my years of experience trying to bridge the gulf between research and operational forecasting. Researchers and forecasters both are prone to letting their egos dominate their interpersonal interactions.

When I was in the Army, I found it distressingly common that I was asked to do things by people who evidently didn't respect me enough to explain why I was required to do what I was ordered to do. I understand the need for instant obedience in the military - in combat. Outside of combat (which was most of my military time), I would have appreciated having situations associated with my duties explained to me. Because I wasn't respected, it was natural for me to feel disrespect in return. Mutual disrespect is not a healthy relationship!

Circumstances often require us to work together, to achieve something that cannot be achieved as individuals (e.g., scientific field observation campaigns like VORTEX2). I think everyone should discipline themselves to overcome the bias that leads them to exhibit disrespect for others. Leaders should communicate with followers in a way that shows respect for the people who will be doing the hard work. Followers should be informed about what they will be doing and understand what to expect rather than simply following orders, should know why they're being asked to make sacrifices for the good of the program, and shouldn't engage in second-guessing the decisions made by their leaders. People in diverse disciplines should assume that what others do is at least as difficult as what they do, and should work to overcome obstacles to cooperation for the common good. Backbiting and second-guessing decisions are poison to collaboration.

I'm not perfect, but I try very hard to avoid saying things in blogs or behind someone's back that I wouldn't be willing to say to their face. It's often challenging to separate criticism of what we say and do from criticism of us on a personal level. Criticism is not necessarily a personal attack! Many of my students have heard me say that your most severe critic is really your best friend. It's what people don't tell you that poses the biggest problem - you can't fix anything if you don't know it's a problem, and it may only be your friends who are willing to tell you about it. Be someone's friend. And be willing to listen to what your friends tell you.
Posted by Chuck Doswell at 11:41 AM 1 comment: Links to this post