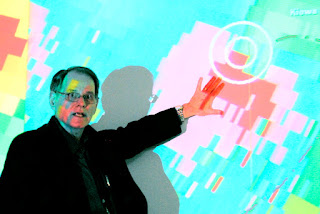 Les giving a presentation in 2009.

I first met Les Lemon (as I recall) when I began working part-time at the National Severe Storms Laboratory (NSSL) as a grad student in 1974  following my "sabbatical" in the US Army.  Les and I shared a passion for severe storms and it was inevitable we would become friends as well as colleagues.  Les told me that he was an eyewitness to the destructive Ruskin Heights tornado of 20 May 1957, and that event was the trigger for his choice of a career.  When we met, he was working with Don Burgess and Rodger Brown in learning how to use a radar with Doppler capability (which eventually would become the WSR-88D network radar).  Les was also working to analyze observations from the NSSL mesonetwork in order to learn about what was going on at the surface during the data collection exercises held yearly by NSSL.  Back in those days, the mesonetwork data required a great deal of effort to analyze.  Les was willing to do whatever it took to learn from the observations, regardless of the observing systems in use. 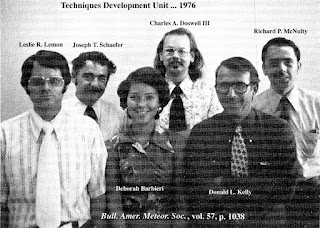 Over time, I came to learn that Les only had a bachelor's degree and he told me he just wasn't up to the math he was required to know in grad school.  Obviously, Les didn't have his "ticket" punched by acquiring a doctorate. Sadly, the highest levels of NSSL management had no respect for his dedication and hard work - they were plagued with what I consider academic snobbery.  And it got no better when he moved to join the Techniques Development Unit (TDU) of SELS in Kansas City.  New boss but the same old prejudice against a researcher without a doctorate.

An important early fruit of his labors was the development of the "Lemon Technique" of diagnosing storms using their 4-dimensional structure and evolution by operational forecasters.  This work had roots in the work of Dr. Keith Browning, whom was deeply admired by Les.  Les received a NOAA award in 1976 for his collaborative research with Don Burgess and Rodger Brown on the recognition of the so-called "Tornado Vortex Signature" revealed by analysis of Doppler radar

It was when we were working together in the TDU that Les and I published our paper in 1979 about mesocyclone and supercell evolution.  That was a collaboration I have been grateful for ever since.  We did a lot of other work together because we had complementary interests and skills.

Les finally tired of being disrespected in the TDU and left NOAA in 1981 for the private sector companies who were building the WSR-88D.  After that, we only saw one another occasionally as our careers followed distinctly different paths.  In 2000, Les was invited to give lectures on the use of radar for severe storm detection in China by the China Meteorological Administration Training Centre and I also was invited some years later.  We both wanted to combine our skills again by being joint lecturers ... but alas, it never came to pass.

Les and I had talked of putting together some instructional texts about severe storms when we were in the TDU.  I was to write about the operational mesoscale aspects of severe storms and he was to do a volume on the storm scale aspects.  His departure left me to write his volume in his stead.  They became the 2-volume set "The Operational Meteorology of Convective Weather"  I've often wondered what his version of the 2nd volume would have been like as I felt not quite up to the task at the time.

Les was a role model of a scientist for me, right from the start.  I wish Les and I could have had much more time working together.  He will be missed by many and can never be replaced.  His contributions are enormous and it was a privilege to have worked with him.  A common thread in those tributes is the kindness Les showed most everyone - it was an important part of who he was.

My deepest condolences to his family and other close friends.

Posted by Chuck Doswell at 11:54 AM No comments: