Tim Marshall and the Truth 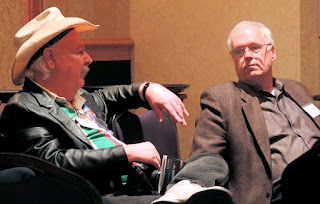 Tim and I chatting at the 2014 ChaserCon.  Unfortunately, I don't recall who took this shot.

I recently returned from the 2009 National Storm Conference put on by TESSA in Colleyville, Texas. There were some great presentations there by Chris Novy and Tim Marshall.

Circumstances associated with this trip permitted me the luxury of spending some time with Tim and his wife, Kay. I really enjoyed that opportunity. Among the many things we chatted about was our involvement in the business of weather consulting, and Tim told me several disconcerting stories about how he's been pilloried by various people for his commitment to the truth. Tim's received hate mail and even death threats! I can understand easily how someone whose home has been swept away by hurricane-induced storm surge might be upset when they find out that their homeowner's insurance doesn't cover flood damage. They've found out, too late, that their damage isn't covered. It's also evident that they'd be angry about Tim's finding that the damage was done by storm surge rather than by tornadoes. Tim is uniquely qualified to do what he does - he has Master's degrees in both meteorology and civil engineering - and is recognized nationally and internationally as one of the best, if not the best at assessing storm damage. People may not like his interpretations of storm damage, but they haven't anything on which to stand when attempting to discredit him and his findings. So the opposing lawyers simply make up false and misleading things to convince a jury that Tim's testimony is dubious.

The sad fact is that anyone who has built close to the shoreline or on barrier islands has put themselves in the center of a bullseye. If they had the appropriate flood insurance, they might be able to rebuild after a hurricane, but it is more than simply foolish to do so. Rebuilding in an area hit by a hurricane is a choice to remain in the bullseye, and the insurance companies are going to pass on the costs to all their policyholders. This means that all policyholders around the country are paying extra premiums that only benefit a few foolish, stubborn people who rebuild in a location that inevitably will be hit again.

My recommendation is that all of that lovely beachfront property should either not be insurable at all, or the premiums should be so sky-high that most people couldn't afford the insurance to have permanent structures built on that property. It's well-known in the meteorology and natural hazard communities that we as a nation have overdeveloped locations such as beachfronts, that are subject to natural hazards (hurricanes, floods, beach erosion, etc.). It's outright stupid to build permanent structures in such places, and we all are paying extra for the bad decisions by developers and those who ignore or are ignorant of the hazards.

It pains me to learn that my friend Tim has been crucified for telling the simple truth. The idea that the vast devastation along the Gulf Coast by Hurricane Katrina was caused by tornadoes is so absurd that entertaining that idea never occurred to me. Tim's conclusions about this aren't the lies of an evil person selling his soul to the insurance companies - they are the truth, plain and simple. Whatever the legal system might decide about this issue in any particular case brought to trial is certainly important in the lives of those who've experienced such losses, but as should be well-known, the legal system is not about truth and justice.

Justice is not a hand-out to those who've chosen to live and operate in a danger zone. Truth is not such absurd fictions as the one that most of the damage in a landfalling hurricane is first caused by violent tornadoes in the rainbands and only secondarily by storm surge. When people choose to build permanent structures in clearly dangerous locations, they should know two things: (1) precisely what their risks are and the consequences of the choice to build there, and (2) their personal responsibility if they choose to go ahead with that decision. Although the developers rightfully share some of the blame, those who choose to buy into these developments have to bear a part of the blame as well - it's their responsibility to learn about the risks. Ignorance is no excuse.

People who tell the truth often are punished for it by people who don't like to hear that truth. My friend Tim is one among many who remain committed to the truth despite the inevitability of being criticized for telling that truth. We need to protect our nation's truth-tellers - we need desperately to learn the truth. And we need to recognize that government has an important role to play in limiting or even preventing the development of dangerous locations (such as beachfronts and flood plains) for the sake of greedy developers and ignorant purchasers of those developments. The cost to this nation is too high in these tough economic times and the unnecessary disruption of human lives (to say nothing of the outright casualties) is simply unacceptable. People directing their anger at truth-tellers like Tim Marshall are misdirecting that emotion.
Posted by Chuck Doswell at 9:24 AM 1 comment: