A tribute to Nancy Knight 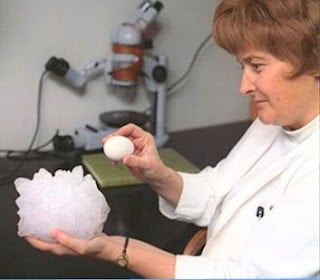 Today I learned the sad news that my friend and colleague, Dr. Nancy Knight died on 26 June. Nancy spent her career studying hail alongside her husband, Charlie, at the National Center for Atmospheric Reseach in Boulder, CO. Her body of work is large and very meaningful, quite evidently a labor of love reflecting a lifelong fascination with the topic of her studies. Nancy Knight was one of the world's leading hail scientists and that simple statement needs no embellishment or clarification. When I first met her, while I was a graduate student at OU, she was pioneering the use of storm chasing in hail research, driving a specially-designed hail collection vehicle into hail shafts. I instantly fell in love with her!! How could anyone not like someone so evidently enthusiastic as to drive deliberately into hail shafts?

With time, I came to know more about Nancy and her husband and their research. They made a great team, but make no mistake -- Nancy was not riding on Charlie's coattails!! She was fiercely independent and that was another trait I found endearing. But she was also gentle and thoughtful of others when the occasion warranted it. Nancy was unselfconsciously kind and caring, although this side of her personality might not always reveal itself. My wife and I had occasion to see it from time to time. Nancy was the sort of person who could make friends quickly because she was an open book -- no one had to struggle to know what she thought about something. Yet another endearing trait!

Although all of us who knew her will miss her terribly, the fact is that she leaves this world a much better place for her having been with us for a time. I'm very grateful to have been her friend and I treasure her memory. Her scientific legacy will live on, of course. I know she was an inspiration to many young scientists, perhaps especially so to aspiring young women for whom role models historically have been scarce.

My deepest condolences go to Charlie in his grief over his loss. I trust he knows what a blessing it was to have shared this life with Nancy. My sincere thanks to Charlie for sharing Nancy and her irrepressible spirit with the rest of us!!
Posted by Chuck Doswell at 10:28 AM 1 comment: Links to this post

A tribute to Charlie Chappell 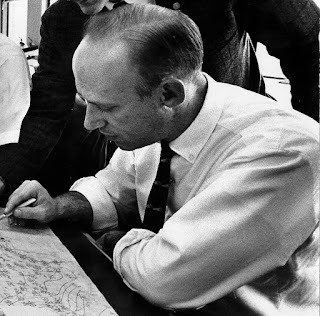 Charlie Chappell when he was a lead forecaster in SELS.  He taught me his methods of surface analysis in my years there as a student trainee.  This was shot in the mid-1960s, when Don House was the Director of SELS.

This is not the first time I've posted about the incredible gift of friendship. It likely won't be the last. Last Tuesday evening, my friend Charles (Charlie) F. Chappell died. Unfortunately, it's an example of an opportunity I missed - to thank Charlie for the inspiration he provided me during the occasions we spent time together. Fortunately, my friend Mike Fritsch expressed his gratitude to Charlie for all that he gave to Mike in a very eloquent way in a letter before Charlie died. Mike has been an inspiration to me, in no small measure because he has done so much with the opportunities he was given. Mike is a brilliant meteorologist and was no doubt a source of great pride for Charlie. Charlie managed to inspire (directly or indirectly) five people who have received the Clarence Leroy Meisinger Award from the American Meteorological Society: Mike Fritsch, Bob Maddox, Da Lin Zhang, Dave Stensrud, and George Bryan. This is an amazing achievement for an amazing man. If you know these people, you must realize how important Charlie's legacy is! These people represent what Charlie was about - dedication to advancing our understanding of the science - and who have used what they were given to advance everyone's understanding. I'm proud to say I'm friends with all of them!

Mike Fritsch is an amazing man in his own rights, as is another "hero" of mine, Bob Maddox. Charlie inspired many of us, indirectly or directly, to achievements of substance. And it's been my privilege to know and admire many such people in my profession. I've known some amazing colleagues (living and dead) who have influenced me to achieve well beyond my own meager capabilities: Bob Maddox, Mike Fritsh, Fernando Caracena, Charlie Chappell, Fernando Caracena, Stan Barnes, Harold Brooks, Chad Shafer, Alan Moller, Ronnie Alberty, Yoshi Sasaki, Walt Saucier, Dave Barber, Barry Schwartz, Werner Schwerdtfeger ... the list is long and I have left out some here who certainly deserve recognition.

I often have said that the biggest regrets in my life are sins of omission: not having expressed my thanks to those who have helped me become what I wanted to be. Charlie Chappell's recent passing is one that bothers me because I never took the time to tell him how much he meant to me. For your own sake, please take that time to say "Thank You!" to those who played a positive role in your life. It probably means more to you than it does to them - they have been rewarded with seeing your success, whether you said anything or not. But to have expressed your gratitude helps a great deal when they've passed beyond your gratitude. Take the time now, while the opportunity still exists! Friendship with inspirational friends is important. Be grateful for it, as friendships inevitably end even as we live on.
Posted by Chuck Doswell at 1:37 AM 1 comment: Links to this post