These days, there's an ongoing brouhaha over Indiana's new legislation signed into law by the governor - it's a "religious freedom restoration act" (RFRA) that effectively grants businesses the right to discriminate against persons on the basis of the business owner's religious beliefs.  An outpouring of disgust regarding this has resulted, including calls to boycott the state.  RFRAs are a total load of rubbish, of course.  The true origins of this legislation are rooted in the fear and revulsion (bigotry) that some people (mainly christian right-wing conservatives) feel about the LGBT members of their communities.  I'm not qualified to offer any sort of psychoanalysis of that fear's origins, so I'll not engage in "pop psychology".

In the USA, there's no need to restore religious freedom!  It's been guaranteed since this nation was founded within the Bill of Rights of the US Constitution.  Some christians are especially fond of seeing themselves as being persecuted on the basis of their religion - in a nation where the majority of its people are christians, christian churches are open and operating throughout the land, christian holidays are national holidays, and most of the people's elected representatives are christian.  Persecution?  What a load of self-centered nonsense!  If religious freedom is under attack by anyone, it's by the christian "religious reich", not the non-christians!  And one of the rights protected by our religious freedom is to be entirely free from religion, despite what christian religious reich apologists assert!  In some cases (e.g., within the military), Americans are literally being forced to participate in religion!

The absurd, convoluted rationalizations on behalf of these RFRAs are a communion wafer-thin veneer over the bigotry many of their supporters show regarding LGBTs.  Consider this:  a civil war was fought, and a massive civil rights protest leading to anti-discriminatory legislation was conducted, just to allow people of color in this nation to be granted their freedoms, rather than being enslaved and marginalized.  Open discrimination on racial grounds is no longer acceptable.  Similar rationalizations to those being heard today, also with their origins in religion were used, especially prior to the Civil War, to justify the evil institution of slavery (which is sanctioned in the Old Testament).  Not all christians see the bible as racist, but racists always have been (and still are) cherry-picking the bible in order to institutionalize their bigotry.  The battles to support civil rights for people of color in the USA have been fought - and, unfortunately, are still being fought to this very day - albeit not with armed conflict, but instead with political activism on both sides.  I'm sorry to say that racism is alive and well in the USA.

So we now have RFRAs designed to restore something that has never been interrupted in the history of the US:  "religious freedom".  What can be the real point of RFRAs?  No rational person today can argue that businesses are empowered to discriminate openly on the basis of skin color (race is now recognized to have virtually no meaningful scientific basis), of course.  Here and now, the fear and loathing are not openly directed at people of color, but rather at a person's sexual orientation.  And virtually identical arguments are being advanced that religion can justify that discrimination.  Of this, there can be absolutely no doubt!  The handwaving and rationalizations are only a transparent disguise on behalf of discrimination.  Please, let the christian conservatives supporting this legislation enlighten me:  just how does baking a cake for a gay couple to celebrate their marriage restrict your freedom to practice your religion?  Such a marriage may offend you, of course, based on your opinion of what the bible says.  Too bad for you, there's no Constitutional protection against being offended!  Are Christ's teachings such that he would discriminate against anyone for any reason?  In the entire New Testament, nothing is said by Christ about homosexuals whatsoever!  The Christ in the bible I read would send no one away, especially those he considered to be sinners.  The notion of homosexuality as a sin might have been extant at the time of Christ, but there's no scientific basis for seeing it as anything other than inborn sexual orientation - you can't catch it from someone else, and it can't be "cured" of it, any more than you can "cure" the color of your skin.  You don't choose to be gay, anymore than heteros choose to be "straight".  Homosexuality is a natural condition, as science has shown, and we share it with many other creatures.

Thus, it seems to me that the real intent of RFRAs is two-fold:  (1) To allow discriminatory business practices, and (2) to push a particular religion-based concept into the law of the land.  Both of these are direct violations of the Constitution, and are lynchpins of the religious reich.  All the other arguments, meant to deflect attention from the blatant bigotry of RFRA proponents, are just so much obfuscation.  They realize they can't simply discriminate against LGBTs, so they create this smokescreen to disguise their true intentions.
Posted by Chuck Doswell at 1:22 PM 2 comments: Links to this post

A memorial tribute to my colleague and friend, Ron Pryzbylinski

This is more or less the text that eventually will appear in the Bulletin of the American Meteorological Society this coming June.  Thanks to the AMS for graciously granting me permission to post this ahead of its formal publication 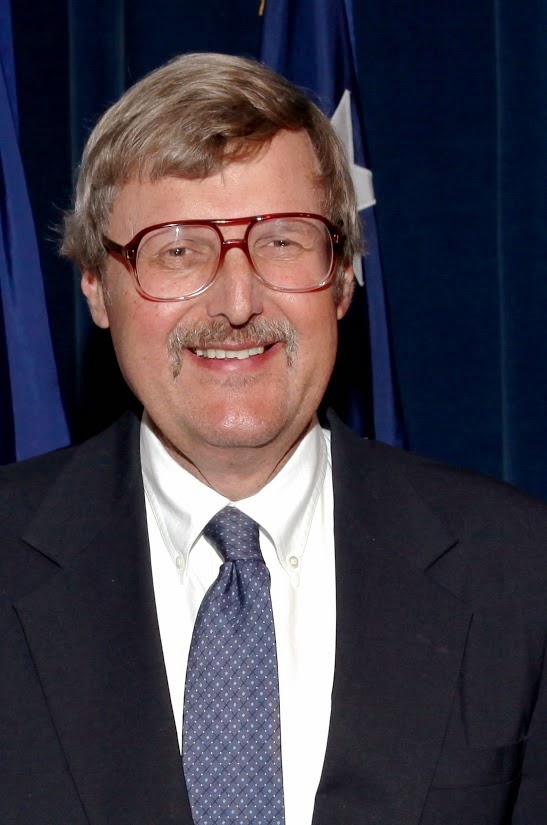 This image is from the National Weather Service, St. Louis, MO.

The severe local storms community, including both research and operational meteorologists, lost one of its most distinguished members, Ron Przybylinski, on 12 March 2015. Ron passed away as a result of complications arising from treatments for cancer, which came as a terrible shock to everyone as he appeared to be recovering from his illness and was about his normal business at conferences and work until his untimely passing.

Ron was born in South Bend, Indiana, in 1953, and obtained his B.S. (1977) and M.S. (1981) degrees in meteorology from St. Louis University.  His full-time professional life began in 1981 when he joined the staff of the National Weather Service (NWS) office in Indianapolis, Indiana.  In 1991, Ron was selected for the position of science and operations officer at the St. Louis office of the NWS, which he held right up to his passing.  Although his service to those offices was at the highest levels, his influence and knowledge went well beyond them, spreading throughout the nation and the world through his publications and his many presentations.

Ron was a forecast meteorologist dedicated to the science of meteorology, applying scientific principles to his forecasts as well as contributing to that science by his research.  His primary interests were bow echoes and quasilinear convective systems (QLCSs), especially when those systems produced tornadoes.  Not only did he do the research, he served that science whenever the opportunity arose:  he was a project leader for the Operational Test and Evaluation of the new WSR-88D Doppler radars in the 1980s.  Ron also helped to organize (and participated in) the Bow Echo and Mesoscale Convective Vortex Experiment in 2003.  As part of the COMET Cooperative Project with Saint Louis University, he investigated severe wind gusts from convective systems, starting in 1994.  Ron also made time in his busy schedule to volunteer as a tornado damage investigator as a member of the NWS Quick Response Team.

In addition to numerous scientific publications and conference presentations, Ron served a term on the Severe Local Storms Committee of AMS, as well as two terms as a Councilor of the National Weather Association.  He was awarded the NWA Operational Achievement Award in 1989, and in 2003 he received the NWA’s Fujita Award for his research achievements.  The AMS awarded Ron the Charles L. Mitchell Award for outstanding service by a weather forecaster in 2012, and in 2013 he was recognized by the National Oceanic and Atmospheric Administration with a Distinguished Career Award for his forecasting and research achievements.

Another important facet of Ron’s career was sharing his passion for storms.  It seemed he could always find time to talk at length with anyone who shared an interest in storms:  with youngsters, students and NWS interns, and his professional colleagues.  He helped to develop COMET training materials, particular those related to bow echoes and QLCSs, and shared his abundant experience and knowledge with many younger forecasters, helping them learn how to deal with diverse weather situations.  Ron’s infectious passion for storms was irresistible to those around him, inspiring everyone who knew him to work a bit harder and learn a bit more.  He had an engaging manner that endeared him to all his friends and colleagues, and he also had a delightful sense of humor.  Ron was a serious meteorologist, but he didn’t take himself too seriously.

Ron Pryzbylinski can never be replaced, but those of us who had the distinct pleasure of knowing Ron and working with him are grateful for the legacy of professional dedication and knowledge that he left us.  We miss him and would like to convey our deepest condolences to his family and close friends.