Who is this for?

As I contemplate writing this tribute, I can't seem to figure out to whom it's dedicated.  I just watched a recorded version of a program about the blues, hosted by Morgan Freeman (one of my favorite actors).  What it brings to mind is a night that will live in my memory so long as I retain the ability to recall things - a night spent at Buddy Guy's club in Chicago.  We had been there to participate in the annual program about storms, storm chasing, and storm spotting put on by my friend Paul Sirvatka from the College of Dupage.  I go to this whenever Paul invites me because - because I grew up there, because Paul is my friend, and because the blues clubs in Chicago are second to none. 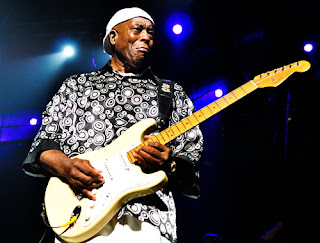 Buddy Guy, performing.  I've been to a few concerts where he was playing and despite his age, he still performs with enormous energy and enjoys interacting with people in the audience.

We had gone to Buddy Guy's club Legends because (a) I absolutely think Buddy Guy is fantastic, (b) Coco Montoya was playing there that night, and (c) what more do I need to say?  It was a great night and I was with my friend Al Moller, who has been a huge influence on me in so many ways, including my love for the blues.  The warmup act was - mediocre - and they had finished playing but the headline act (Coco Montoya), was not yet onstage.

I don't recall the details, but suddenly, I hear Al calling me.  "Chuck, come here!  It's fucking Buddy Guy!"  I needed no further motivation.  I went to where he was yelling, and lo and behold, it was indeed Buddy Guy!  I felt like a stupid kid - just what do you say to someone who is truly a living legend?  I mumbled something about loving his work - no doubt it was pathetic - and shook the hand of the great man.  I don't even recall what he said, but I'm sure it was something nice.  I've been in a somewhat similar position and the adoration is kind of embarrassing.  But I just couldn't help myself.  I was just another of his many adoring fans.

I remember asking him if he was going to perform.  No, he said, but he was looking forward to Coco Montoya's performance.   And indeed it wound up being a memorable performance.  There's nothing like the relationship between a great blues musician and his audience!  You just can't capture that in a studio.

I enjoyed this TV presentation of the blues, though it was the usual TV treatment:  mostly superficial and far less that what the topic deserves.  The blues is a great, uniquely American idiom, contributed by the African-American segment of our population and largely unrecognized and unappreciated by white America until the British re-introduced it to us in the 1960s.  The blues musicians were exploited by the music industry.  It's only lately that we've discovered the geniuses in our midst and given them some small recognition for the immensity of their contributions.  No doubt racism is at the heart of this long-delayed recognition, but the fact that people are now willing to accept the importance of the blues in our musical world is at least an encouraging sign of the eventual demise of the scourge of racism.

But seeing Buddy Guy in this TV program made me think of my friend, Al Moller, as well.  In many ways, my long friendship with Al puts me in a better position than I was in with Buddy Guy that night.  I've known Al since 1972, and we have had many adventures together, as well as many shared experiences (not limited to storm chasing!).  I feel more comfortable around Al.  I have the benefit of those years of friendship with a great man.

I wonder what it might be like to be Buddy Guy's long-time friend.  Alas, that's something I'll never be able to know.  What sort of person would I think Buddy Guy is?  If I judge by his music, I think we could be friends - but how meaningful is my response to his music?  Is his creative work indicative of what sort of person he is?  When it comes to it, does my professional work indicate what sort of person I am?  When I think about the work of Al Moller, I see him and his professional work inexorably intertwined.  I see the connections between Al the man, and Al the professional weather forecaster.  I know of the passion that drove his work and which manifested itself in so many ways in his life, including his incredible photography.  I see those connections because I've known Al for so long.

This all forces me to believe that if I had been Buddy Guy's friend for as long as I've known Al, I think his work reflects his passions in a similar way.  Ultimately, we may share that connection, whether we are close friends or not.  Is this essay about Al Moller, or is it about Buddy Guy?  Or is it simply another piece in my lifelong struggle to understand myself?  Sorry - I can't answer that.  But I'm grateful for my friends, and I'm grateful for the joy music gives me.
Posted by Chuck Doswell at 1:32 AM No comments: Links to this post

Many people seem to think that as an atheist, I believe it's my duty to convert everyone to disbelief in a deity.  My believer friends assume I'm trying to convert them, and some of my atheist friends consider it an important part of a supposed campaign to stamp out religion.  But I reject this notion utterly.  I'm not proselytizing for atheism at all!

Make no mistake - especially when it concerns the abrahamic religions (christianity, judaism, and islam), I consider religion to be a pernicious influence on our society without which we'd definitely be better off.  But I also know that trying to change the strongly-held beliefs of believers is mostly a waste of my time. Believers interpret things through the lens of "confirmation bias" whereby they see everything as confirming their beliefs and disputing anything that threatens those beliefs.  If I propose rational arguments against those beliefs, they'll not only not be convinced by anything I might have to offer on behalf of my disbelief, but some might accuse me to trying to convert them, thus confirming their erroneous assertion that atheism is just another belief system, despite the logical situation that disbelief cannot be a belief!

If I thought rational arguments would be effective in converting believers to unbelief, I likely would follow that path, because in my opinion, religions are a system with more downside than upside for our modern societies.  But instead, here's where I'm coming from:  I know it's unlikely I can get you to toss aside your comforting delusions and myths, so I'm not going to try.  In fact, I support fully your right in these secular United States to believe in whatever you choose.  All I ask in return is that you do the same, and not force your beliefs on atheists and other nonchristian believers by inserting religious doctrine into public institutions.   Is that asking so much?  Apparently, it is - some believers see any opposition to putting "In god we trust" on our currency, or to affirming that our nation is "under god" in the pledge of allegiance as an infringement on their religious freedom.  This is such a monumentally illogical argument, it's hard to know even where to begin to refute it.

Some of my believer friends tell me to just ignore the intrusions of religious doctrine, if it bothers me.  It's just so many words by which I should not be offended.  Or they say, contrary to the reality of history, that the US is founded on religious principles, which couldn't be farther from the truth, but they have bought into revisionist history by which everything is given a religious spin by those who would distort truth in order to carry out a religious agenda that seeks "dominion" - that is, to impose a christian theocracy on the US through the ballot box.  Or they say it's their right to do so because they represent the majority of Americans.  They would seek to impose the tyranny of the majority on all other believers (not of their ilk) and on nonbelievers as well.  If need be, they will toss the Bill of Rights aside in their drive to christian dominionism.

I speak out against the activities by christian dominionists that would increase the penetration of christian religion in our secular nation.  I dispute the absurd illogic that permeates the abrahamic religions because we can ill afford to sink even further into irrationality at a time when we need all the rational thinking we can muster.  We share in challenging times - believers and nonbelievers both - our economy is a mess, unemployment is rampant, the disparity between the rich and the poor is expanding even as the middle class is being pushed seemingly inexorably toward poverty, corporations are buying influence on politicians with increasing success, perpetrators of corporate crime are escaping any justice whatsoever, our civil rights are being trampled upon in the name of the illusion of security against our putative external enemies (shades of 1984), people increasingly are rejecting science in favor of religious myths, and our education system has been pushed to the brink of irrelevancy.  Freedom and liberty are being threatened on many sides and we need innovative thinking, unconstrained by irrelevant religious doctrine.  Oh yes, if I thought I could change people's minds to reject their security blanket of religious nonsense, I would certainly try.

I post these thoughts not in the vain hope that I will convince believers to abandon their beliefs, but to clarify that my goal is not to do so at all.  My posted thoughts are a plea for a commitment to freedom and liberty for everyone, not just the christian believers.  If there is to be any hope for a common ground upon which believers and nonbelievers can work together, it must be on this secular core represented by the principles of this secular nation as embodied in our Constitution.  If we cannot work together to achieve freedom and liberty for all, then our nation will have failed utterly to have lived up to its promising start.  We will cease to be the shining beacon of freedom we like to believe ourselves to be and will become just another fascist theocracy.
Posted by Chuck Doswell at 2:11 AM 3 comments: Links to this post