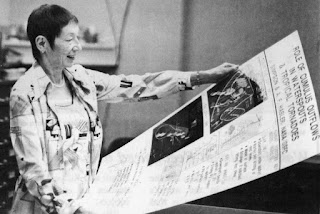 Joanne Simpson looking over a weather conference poster presentation of which she is the lead author, in1985.

Yesterday - 4 March 2010 - Dr. Joanne Simpson died. Dr. Simpson had a long and very productive career as a meteorologist, with a vast array of professional accomplishments to her credit. It's somewhat unfortunate that she may be most widely recognized as the first woman to earn a Ph.D. in meteorology (University of Chicago, 1949). Although I didn't know Dr. Simpson very well, we met a few times and I was honored by some remarks she made about me to a colleague - I have to paraphrase her comment as I can't vouch for a verbatim quote: "He's just a crazy cowboy, but he does good science." Coming from someone of her scientific stature, that was high praise, indeed! I was honored that she saw me in those terms.


Today (5 March), I feel some considerable sadness over her passing, but this is tempered by the knowledge that Dr. Simpson left us a huge legacy of accomplishments. Her triumphs were our triumphs (i.e., we meteorologists), and our profession is by far the better for her long and distinguished career. That limits any sorrow I might otherwise feel over her loss.

Dr. Simpson was a formidable figure. If you crossed paths with her, you would be in for a tussle and she'd neither give nor ask for any quarter in the argument. She wanted to get at correct answers to scientific questions, whatever it took. On the other hand, my limited experiences with her showed her to be warm and compassionate. Moreover, I'm confident that when she interacted with students and young admirers, she was full of encouragement and support - although I can't say so by direct experience, I've heard this from others. I admire both qualities in professionals, and I believe she had them both, in abundance.

Hence, I will speculate that Dr. Simpson would not embrace being labeled as a "female meteorologist" - rather, she likely would be want to be recognized simply as a meteorologist. Not that she was ashamed to be a woman - no, not hardly! She was justifiably proud of her success after all the negativity expressed simply because she was a woman. Nor would she wish to ignore or downplay the travails she experienced at the hands of her exclusively male professional peers early in her career. And I use the term "peer" intentionally - she was their equal (or, in many cases, their superior!), even if they chose not to recognize or acknowledge that.

Her determination to pursue her career goals no matter what challenges it might entail is yet another character trait I admire greatly. I've seen the attitudes in meteorology toward women become distinctly better in the last 20 years than they were at the time Joanne Simpson completed her doctorate (those attitudes hadn't changed by much yet, when I began college in 1963). No doubt that many women in the profession today see her as a role model, and have her to thank for breaking down those barriers. Times have changed, although I believe they are yet to be where they should be - meteorology is still learning how to accept women as professionals.

Although I never had the chance to interact much with her, Dr. Joanne Simpson is a hero of mine. I'm proud that our profession managed to produce a figure of her capabilities, who had the strength of character to succeed in the face of considerable disrespect from those nominally charged with nurturing people toward careers in our profession. But mostly, I'm proud of her accomplishments, which need no qualification regarding her gender. She did excellent science and became a well-recognized leader whose body of work made a compelling case for her acceptance in any role she chose to assume in the profession. The fact that she was a woman is irrelevant to all that, but if you take her gender into account, it makes her accomplishments stand out even more.

This profession mourns her loss today, but we should be thankful and happy that Providence saw fit to share such a person with us for such a long time.
Posted by Chuck Doswell at 3:05 PM 1 comment: Links to this post