Can We Prevent the Coming Tornado Disaster?

Recently, a photo taken from a AA baseball game shows a storm that is pretty close to the field and the players are still out on the grass in the open: 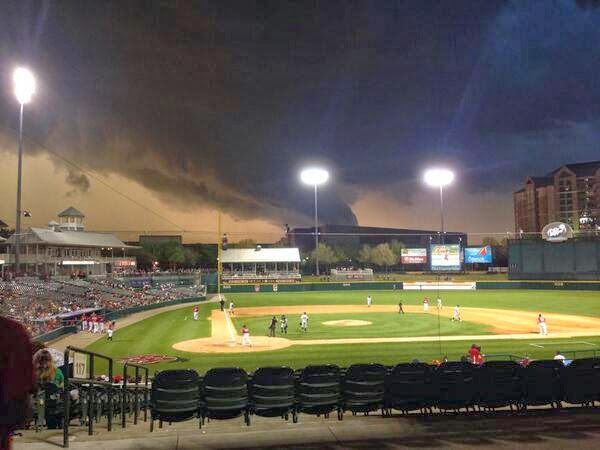 Some might think that's a tornado, but it's not ... it's an example of a so-called "shelf cloud" associated with storm outflow winds.  The primary danger to the players and fans in this photo isn't from a tornado but from strong winds and lightning.  A proper venue plan to mitigate those dangers would involve input from a meteorologist to provide a warning with enough lead time to protect the players and fans.  Such a warning could not offer absolute certainty, of course, and the venue operator may not wish to shut down the game, thereby losing profits, unless it's virtually certain that such action is needed.  Hence, the reason players are still on the field may be this profit-driven reluctance.

Note:  in baseball, I think it's the formal responsibility of the umpires to delay or call the game for safety reasons.  The referee has that authority in football.  Nevertheless, the venue operator no doubt bears some responsibility here.  There has been some improvement in sports venues to reduce the lightning threat, but this photo seems to suggest there's still a ways to go.

Many of us meteorologists are concerned about the potential disastrous impact of storms on large venue activities:  ball games, amusement parks, concerts, and so on.  It's inevitable that a really bad storm will hit one of these events and cause mass casualties.  There are numerous examples of near-misses by significant tornadoes, for instance.  There's no reason to believe that good fortune will continue forever.  Rather, it's inevitable that a large venue event will be hit by a strong tornado.  It's frightening even to contemplate such a disaster.  Despite the efforts by some of us to heighten the awareness of this danger, the response has been less than overwhelming, as this image suggests.  What are the reasons for this reluctance to act on the potential for a disaster?

I've already mentioned the profit motive.  Cancelling an event hurts profits, and after all, the primary reason for an event is to make money.  It's my understanding that if such a catastrophe could reasonably be anticipated, it's the legal responsibility of the venue operator to have a mitigation plan and implement it.  Can this reasonably be anticipated?  I think I just did and I like to believe I'm being reasonable!

Venue operators must weigh the loss of profits against the potential losses through legal action after a disaster occurred for which the venue was unprepared.  I detect a bias in their responses toward ignoring the threat of those lawsuits in preference to those short-term profits.  And providing some sort of storm shelter for patrons could be expensive and remain unused for a long time.  For some events, it's hard to imagine any practical way to provide shelter for everyone.

In my experience, most people (not just venue operators) have no wish to learn about the real risks that confront them.  There's a lot of good information produced by the National Weather Service (and other sources, like FEMA) that's specifically intended to inform non-meteorologists about the threat from thunderstorms and severe weather.  Thus, the information is available.  Why might people not wish to learn about risks to their lives and well-being, thereby being prepared to take appropriate action?  I'm not a social scientist, and we have much to learn about human behavior, but I can speculate.  For one thing, many people have experienced storms and survived without harm.  A common phrase heard after the impact of a really bad storm is "I've never seen anything like that!"  People tend to assume their experience is much more representative of reality than it actually is.  If, in their lifetime, they've never been hit by a tornado, then without thinking about it, they can fall into the "normality" bias ... it's normal not to be hit by a tornado, so it's easy to assume that will continue forever!  People choose to accept myths as truth because they want those myths to be truth.

Rare events are inherently dangerous, because that rarity fosters complacency.  Why take the time and resources ($$) to prepare when you most likely will never have need for such preparations?  Never mind that someone experiences such an event virtually every year.  "It's not possible for that to happen to me!  It only happens to others!"  And commonly, after someone is hit, they say "My sense of security has been destroyed"  That sense of security was an illusion, not reality.

Someday, and I can't tell where or when, a 'perfect storm' of factors will result in a bad storm hitting a large event venue and mass casualties will result.  Then, the lawsuits will fly, and fingers of blame will be pointed.  We could reduce the chances that it will be a disaster by proper mitigation plans and measures.  Can a coming disaster be averted with mitigation plans and preparation?  Yes, of course!  The question is, however, will that disaster be so averted?  The jury is still out ... sad to say, it may take a disaster to cause much movement toward mitigating the potential for more disasters.  We humans tend to learn lessons the hard way.
Posted by Chuck Doswell at 1:49 PM 13 comments: