A tribute to Matt Biddle, my friend and colleague 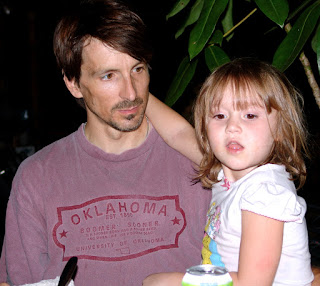 Matt with his daughter, Faith, on the occasion of a visit to our home

My friend Matt Biddle died last evening (10 April 2018 - the 39th anniversary of the Red River Valley tornado outbreak), after a long struggle with a host of physical challenges.  I can't detail his entire medical history, but his most recent problem was a heart stoppage, resulting in anoxic brain damage.  When Vickie and I went to see him in the ICU of Mercy Hospital, he was unresponsive and on a ventilator.  His family then decided the best thing would be to take him off of life support.  His passing was peaceful and his family was there at the end.

Matt was saddled with these physical difficulties for the entire time I knew him, but he somehow managed to carry on with his life.  To me, that represents extraordinary courage and determination - those were two of his defining characteristics.  Matt was seriously dedicated to issues that involved people, as a geographer who felt compassion for others and sought to provide mechanisms to reach out and help those with physical handicaps in severe weather situations, even as he had to overcome so many physical problems himself.  His contributions to the University of Oklahoma in terms of storm preparedness were vastly out of proportion with his rewards - both financial and personal.  He was an avid storm chaser and participated in scientific field programs whenever given the opportunity - he supported the science with his full commitment to whatever missions he was given.  He was also a big fan of the Detroit Red Wings.

Matt was an opinionated, argumentative person, so naturally I was drawn to him - so much of what he said and stood for made perfect sense to me.  Of course, I didn't always agree with him about everything, so we argued frequently.  I don't believe he ever took this personally and he gave at least as much as he got.  I always respected what Matt had to say, even if I disagreed at times.  Sadly, Matt wasn't appreciated by academics and management because he spoke his mind clearly and with passion.  Most seemed ready to kick him under the proverbial bus rather than to provide him with opportunities and the means to contribute.  I was able to help Matt obtain his PhD in Geography after Matt had a stroke that left him with aphasia affecting his ability to speak and write his thoughts.  Think about how frustrating it would be to have thoughts but be unable to express them!  Nevertheless, I forced him to do as much as he could without my intervention, so he could feel he "owned" his dissertation.  I was so proud of him and pleased to see him conquer the process and his aphasia on the day he successfully defended his doctoral dissertation.  Unfortunately, even that achievement failed to win him much respect in the professional world.  We tried several times to get funding to do various interdisciplinary projects related to severe storm preparedness, but ... no luck. 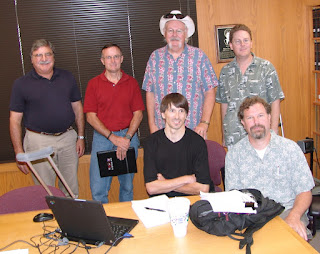 His life during the time I knew him seemed to be a constant roller-coaster ride.  Great joy and satisfaction with his successes, only to be laid low by one physical issue after another.  His greatest and most constant joy was his daughter, Faith, who is pretty and quite bright - she's always done well in school.  I know she looked up to Matt and did things to help him cope with the tough side of his life.  He simply adored her.

I regret not having spent more time with him.  I'm reminded of an occasion when I was chasing with Al Moller in Kansas.  Several of us, including Matt, converged on an Applebee's in Newton, KS for a late supper.  We all jabbered on for a long pleasant interlude before going our separate ways.  A happy memory.  It's also somehow comforting to know that despite all his difficulties, he was able to chase;  it was something he loved doing.

Occasionally, we'd get together for a beer and perhaps a meal, but in retrospect, I wish we had done so much more often.  Matt leaves behind many in the chasing community who held him in high esteem.  If the level of his professional support had been based on the admiration of his friends, he'd have been able to do great things.  His passing is far too soon but the challenges with his body he faced were too much even for his strong will.  Matt may never be cited very often in scholarly circles, but his spirit and his accomplishments live on in the hearts and minds of the many who knew and loved him.  He will be missed by a multitude.

Posted by Chuck Doswell at 10:09 AM 10 comments: Links to this post