A teaching moment ... weather versus climate

This spring of 2013 has been on a roller coaster so far.  Today is 01 May and there's snow on the plains, with the prospect of record low temperatures for this time of year, even as I enjoy a day with spring-like warmth (and a cold front bearing down!).  Facebook is agog with the weather, even among my weather geek friends.  The persistent weather pattern has favored sending powerful arctic air masses into the USA repeatedly.  That pattern itself is, at any instant, the result of many processes interacting in complex and rather poorly understood ways.  At times, the weather pattern is "locked in" to a certain structure, so that it can stay more or less unchanged for many weeks, or even whole seasons.  So what we're getting from this pattern is alternating warm-ups and cool-downs.

It's a cliché (for good reason) that the climate is what you expect, but the weather is what you get.  I wrote an essay about this some years ago, when I was upset about the widespread use (and misuse)  of the word normal.  In that essay, one topic was the standard averaging period in use for what is the so-called climatological normal period (30 years) used by the National Weather Service.  The NWS is careful to point out that "Note that the climatological normal taken over different periods of time (30 years, 1000 years) may be different."  Thus, what's considered officially "normal" by the NWS can change with time, and of course, it does change!  30 years isn't a particularly meaningful number of years - it's short and it's arbitrary.

This highly variable spring is a classic example how the real atmosphere works, and how the climate is not the same as the weather.  Despite everyone's real experience, many people persist in the belief that the changing weather is automatically an indication of the changing climate.  Let me illustrate with some typical expectations: we expect daytime to be warmer than nighttime, although most of can remember situations where the opposite was true.  We expect colder temperatures in mid-winter than in spring, although most of have experienced situations where the opposite was true.  And so on.  Despite our own personal experiences, weather changes seem to catch many people by surprise (and unprepared).

In my professional work with tornadoes, I often say that the weather producing tornadoes doesn't know anything about the calendar, the clock, or the map.  It can happen in places and at times where it's unusual to experience tornadoes.  Tornadoes have occurred all over the world, at all times of the day, and in all seasons.  When the atmosphere assembles the ingredients for a tornado in an atypical place or time, the tornado will occur despite being particularly infrequent at that place or time.  In the very same way, if record low temperatures are set this week as we move into May, the weather is not "wrong" or "crazy" and these aren't necessarily "freak" events.  What is typical of the weather is that it varies, sometimes to an extreme!!  Who has not experienced a mid-winter warm-spell, or a summer cool snap?

We don't know the absolute limits on that variability, because our sample of the weather with modern instruments only goes back about 150 years.  Do you really think that all of the possible weather events have happened within a record of 150 years?  Guess again - even if we had accurate quantitative weather data that went back a thousand years, or ten thousand, that record would still fail to sample the full range of what the weather is capable of doing.  Climate scientists have come up with some ingenious ways to estimate average temperatures many thousands of years ago, thereby extending our record back well before the invention of meteorological instruments - these are the basis for our current understanding of how the climate has varied over very long periods, but superimposed on that long-term graph are large fluctuations from one year to the next.  We have something similar in the climatology of tornadoes: 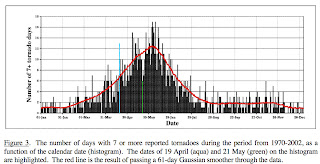 The figure is for the number of days with 7 or more reported tornadoes, but if it were simply the number of tornadoes, the result would be similar.  The real climatological long-term average by day of the year is not known, but it likely would be quite similar to the red line produced by a smoothing of the data.  There's no reason to believe that particular dates are favored over adjacent dates - the climatology should be a smooth curve, like the red line.  Evidently, there's wide variability from one year to the next.  In effect, the red line is a proxy for the climate and it can be seen that on a particular day of the year, the number of days with 7 or more tornadoes can be quite far from the climatological expectation.

If there were ever to be a year that was perfectly "normal" (however you choose to define normal) every day, everywhere, it would be the most unusual event in human history!!  A perfectly normal year would be a freak event!!

This year's spring is a perfect metaphor for the difference between weather and climate.  Keep this in mind when you see media coverage that confuses the difference.  Be informed.
Posted by Chuck Doswell at 12:57 PM No comments: Links to this post