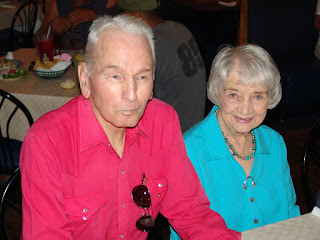 Bill Leftwich and his charming wife, Mary Alice.  This was in 2005, I believe.

Another friend of mine has passed. I heard last evening that Bill Leftwich died in his sleep the evening of 27 April in Fort Davis, Texas, at the age of 85. Bill was a local figure of some note in the Fort Davis community and I met him through our mutual friends, Hal and JoAnn Belknap. JoAnn passed on this sad news. [Hal died a little more than a year ago now.] Bill was a complex character and a man of few words, but easy to get to know. His likes and dislikes were evident but so was his warm heart. He had a sense of humor as dry as southwest Texas.

Bill's primary passion was art and he produced a considerable body of work as a painter, sculptor, and writer - all of it focused on themes associated with his life experiences. His home was also his studio and I was afforded the opportunity to visit with him and his wife, Mary Alice, and see many examples of his art. Bill was a proud graduate of Texas A&M University - and he remained a fiercely loyal Aggie fan right to the end. Bill also served his nation in WWII as a tank commander - he was commissioned to create a sculpture of Audie Murphy for Camp Mabry, in Austin and I know he did another sculpture for his beloved Texas A&M, which I know pleased him a lot.

I'm very sorry about his loss, and know that he touched many, many people who will miss him, myself included, but I'm glad to have had the privilege to know him. My condolences to Mary Alice and the rest of Bill's family. 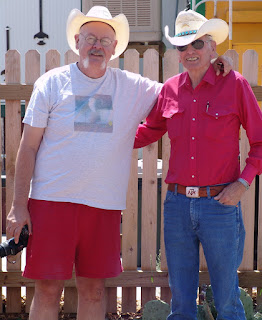 Two guys wearing cowboy hats ... one isn't a real cowboy, though ...
Posted by Chuck Doswell at 10:37 AM 5 comments: Links to this post