My tribute to Dr. Edwin Kessler

Edwin Kessler came to be the first director of the National Severe Storms Laboratory (NSSL), when he was appointed to the posting by Robert Simpson in 1964.  He was a relatively young and inexperienced man for such a position, so for someone as distinguished as Robert Simpson (more well known for his work on tropical cyclones) to have such high confidence in him reflects his recognition as both a scientist and as a leader in the science of severe storms.  More information about the early history of NSSL can be found here and here. 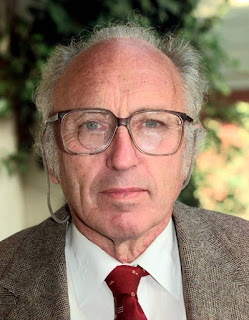 I arrived in Norman in the fall of 1967 to begin my Master's degree studies with Dr. Yoshi K. Sasaki as my advisor.  This was during the time of the Vietnam war and shortly after beginning my grad work, the student deferment from military service was abolished for grad students and I became a prime candidate for the draft.  The Director of NSSL was impressive to me and Dr. Sasaki's support allowed me to add Dr. Kessler to my grad student advisory committee!!  I finished my M.Sc. in haste (3 semesters), owing to the imminent threat of being drafted.  Dr. Kessler asked some tough questions during my thesis defense in 1969, but I managed to pass it, and so began my Ph.D. studies the following semester.  I was drafted in the summer of 1969, while working as a student trainee at the National Severe Storms Forecast Center (NSSFC) in Kansas City (for the 3rd consecutive summer).  You can read about some of my military experiences here.

Upon returning to my graduate studies in 1972, Dr. Kessler remained on my committee to the end of my student days.  He was responsible for delaying the completion of my doctoral program,  noting that he felt I had not done enough to satisfy his high standards for a doctoral dissertation.  I can't say that the additional requirements made me happy, but in retrospect, it was not a completely unreasonable request.  At my dissertation defense, he was satisfied with what I had done and I was relieved to be finished.  It was during my time at NSSL that I got the idea for my dissertation research.

I note that after I returned to the pursuit of my doctorate, Dr. Sasaki was leaving OU for a year of sabbatical leave, and he informed me I had to find a way to support myself for the year he was going to be gone.  In this 'crisis' I turned to NSSL and Dr. Kessler for help.  I applied for a part-time NSSL position and had the benefit of a military "veteran's preference".  I was hired for 30 h per week in August of 1974, remaining there until I graduated.  My supervisor was Dr. Ron Alberty, but it's clear that my opportunity was supported by Dr. Kessler.  He supported many other students and early career scientists beside me, of course.

After working again in Kansas City in the Techniques Development Unit of NSSFC for six years, I moved to Boulder and worked with the Weather Research Program there for four years, led by Dr. Robert Maddox.  When Bob moved to Norman to be the new NSSL Director, following Ed's retirement, I followed Bob soon thereafter.  I finished my NOAA career there in 2001.

It was after I moved back to Norman in 1986, that my path was crossed again by Dr. Kessler, who was now retired but who was very active in politics as a champion of liberal, progressive ideals.  Thus, we shared the experience of "living blue in a red state".  Ed and I both were not pleased with commercial weather modification, so on one occasion, he and I were partners in challenging a weather mod operation in west Texas.  It was a slam dunk for us to show the locals what a sham the cloud seeding operation really was, so the county voted afterward to cease funding commercial cloud seeding operations.

Then came the fiasco associated with state support for building the so-called National Weather Center (NWC) to house most of the weather-associated organizations operating in Norman.  I won't say a lot about this, but more information can be found here.  Ed and I were on the same side, opposed to the process as a matter of principle.  It was rather ironic that his memorial service was held in the NWC atrium, since he had been so adamantly opposed to the process by which the state found the money to live up to their part of bargain between NOAA and the University of Oklahoma by robbing the oil storage tank cleanup fund.

Ed Kessler and I were not what I consider to be close friends, and I didn't always agree with his professional decisions as NSSL Director.  Nevertheless, I can without hesitation say that I admired his work as a scientist:  his work presented in the AMS Monograph "On the distribution and continuity of water substance in atmospheric circulations" is pure genius in its use of simple mathematical and numerical models to explore an apparently simple topic in great detail.  It's now out of print, but it contains the essence of the so-called "Kessler microphysical parameterization," the pure simplicity of which has led to its extensive use in numerical convective cloud simulations for decades.

Not being a radar specialist, I won't comment much about Ed's massive contributions to the operational implementation and research use of Doppler radars.  He probably would chafe at the title given to him posthumously by some as the "Father of Doppler Radar" - he readily acknowledged the valuable contributions by colleagues and would likely argue that Doppler Weather Radar as we know it is the child of many fathers, not just one man.

I'd be remiss in not acknowledging his support during the early days of scientific storm chasing (see here and here for my perspective on that early time in chasing).  Like most of the senior science staff at NSSL in that era, he was pretty skeptical about the value to science of chasing storms, but he nevertheless supported the project with real resources, without which the project might never have gotten started.

Thus, although not a close friend, Dr. Edwin Kessler was a person who played a significant role in shaping my life and my attitudes.  He was a mentor rather than a friend, and I always valued and respected his professional (and political) perspectives.  He was a generous man who made a positive difference in many lives and championed causes that have saved countless lives from severe weather events.  No doubt he leaves this world a better place for his time here.

My condolences to his family and close friends.  Many of us are grateful for their sharing of this great man.

Posted by Chuck Doswell at 9:06 AM No comments: Links to this post