A tribute to Fred Goodwin, Jr.

Yesterday morning (14 Aug 2019), I lost another friend:  Fred Goodwin, Jr.  My sincere condolences to his family and his friends (of which there are many, for good reasons).  What I'm saying here isn't a summary of Fred's life, but is an account of how and why Fred and I became friends.

This is one of my favorite photos of Fred, giving a summary of my son Chad's accomplishments on the way to Eagle Scout, at the Ketner farm (see below), during his Eagle Scout Court of Honor. 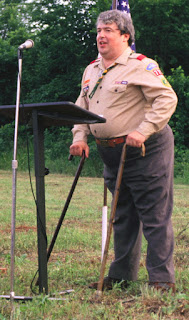 Thanks to the enthusiasm of my son Chad, he joined a Boy Scout troop (Troop 777, now dissolved) and though I didn't know it nor did I even suspect it, I was about to embark on a great adventure with my whole family - Scouting!  My knowledge of scouting was minimal, since I had quit Scouts as a boy before I even earned my Tenderfoot status - the leadership of that troop was more like a collection of Army drill sergeants and that was not appealing to me.  What I wanted was hiking and camping!  Little did I know that my wish would be granted decades later!

In the process, I was "drafted" as an Assistant Scoutmaster to be a "patrol dad" in the new Eagle patrol that included Chad.  It was via this process that I met my fellow patrol dad, Fred Goodwin, Jr.  I knew nothing about Scouting and Fred was physically challenged as a result of Cerebral Palsy.  He needed some support to stand and was eventually confined to a wheel chair.  But Fred was an Eagle Scout, as was his father, so he used his knowledge and experience to help me learn what I needed to learn.  Together, our combined abilities were one complete patrol dad.  And I found an amazing new friend.  Plus I got to know his boys, John and Fred III, and truly enjoyed the fun experiences we had on hiking and camping trails where my partner couldn't go.  At the end of the trail, Fred would be there with questions about how it went and what experiences we had shared.  He was justifiably proud of his sons, who both eventually became Eagle Scouts - Freddie at the same time as my son.  They were the second and third boys to make Eagle in our Troop.  And the first 777 Eagle scout was in our patrol!

Our patrol had some boys who were challenged by their home situations.  That was common in Troop 777.  Fred told me that for some boys, the experiences they had as a result of scouting could be the only positive experiences they were going to have in a given week.  Moreover, Fred informed me that if Chad needed any correction to his words and/or actions during a scouting event, the other adults in the troop would take care of it.  In other words, I was to back off and shut up!  I learned the wisdom of that and found I have large reserves of patience for teenage young men other than Chad.  I tried to put my ego aside, and to apply that lesson of patience with my own son!  We're in Scouting to help boys mature into good men, to push that process forward however we could.  The troop was zeroed in on the boys, not us!!  It became evident that our leadership included some pretty wise people, including Fred.

Fred and I made extensive use of land owned by the Ketner family in East Norman, who had generously donated use of that land for weekend campouts.  Fred let me know that our job was to help the boys learn how to run the patrol on their own, so we gradually increased the scope of their responsibilities and after a few years, Fred and I could relax and let the boys run things.  They readily accepted their responsibilities and I learned that we had to allow our Scouts to fail as they tried new things.  Failure can be an excellent teacher.

There are far too many stories of how Fred helped me in Scouting to tell here.  The Ketner farm was where Freddie and Chad wanted their Eagle Scout Court of Honor.  That ceremony became quite a memorable experience, thanks to hordes of evil chiggers!

It became clear that I wanted to be part of the process that Fred and other adults in the troop were carrying out.  There was a perfect balance between fun and doing what was necessary to achieve rank advancement in Scouting.  We were not a Scouting "eagle factory"- but we did produce our fair share.

Fred accepted many more roles in the troop than "just" a patrol dad.  He was always willing to help if need be, and he helped many more Scouts than the members of our Eagle Patrol.  He trusted me with both his boys during their journey in Scouting as Scouts.  His boys have both become fine young men, with families of their own, and I'm proud of what they've achieved so far.  We loved Fred's parents a lot, and still miss them.  I know Fred was proud of his family, naturally. 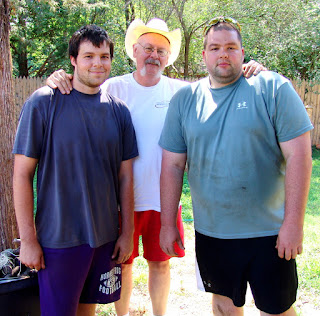 Fred's grown-up boys John (left) and Fred III ("Freddie"- right) as we were working on a project at Fred's home.

Fred was "handicapped" with his CP, but in my humble opinion, he did more with his capabilities than most others without such handicaps ever manage to achieve.  He worked for the OU Physical Plant and clearly was an important cog in that machine.  That Fred will be missed is pretty much assured and his deeds achieved good ends that will live on, many of which I probably am unaware.
Posted by Chuck Doswell at 10:16 AM No comments: Links to this post